Here I Am: John

Hear from John and Caroline, about John’s work and their experiences around learning disability. 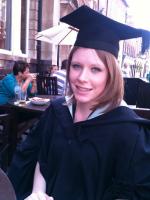 John Livingston is a dancer and choreographer from London. He also has Down's syndrome. I recently sat down with John and his Mum and manager, Caroline, to discuss his work and some of their thoughts around learning disability,

How did John start performing?

Caroline: John started performing with Chicken Shed Theatre Company. Then he decided to go down the dance route, instead of acting. He took part in the Candoco Foundation Course where he was a member of the youth company. He was performing all around London; in big venues like The Southbank Centre.

However, the funding for that stops at 25, so there was a period where John wasn’t dancing which was heartbreaking. Then he was with a company called Culture Device Dance Project, but that didn’t work out, so that’s when John decided to go solo. Then it was only in 2014 that John started to perform in the way he is now, which is improvising.

What is your creative process?

Caroline: We hire a space at Chisenhale once a week. I source the music, then John responds to it, or doesn’t, whatever the case may be. The performances are driven by music so I have to be very careful with the choice of music, because sometimes it can be too emotional.

How would you describe the style of performance?

John: I think it’s very unique. I just go with it. Sometimes it can take a while to get used to the music, and then you get into it after that.

How often do you train?

John: I train in the gym two times a week with a personal trainer. Wednesday and Thursday, until 12pm. It’s hard, but that’s training for you. It has to be hard.

What has been your proudest moment?

Caroline: There are lots really. Like when John was performing in Germany as a soloist. And when he was performing as a soloist on a huge stage at Tramway in Glasgow. Also, when he was filming actually, because it’s not easy. John was in the studio with 3 lots of cameras on him, which isn’t easy, but he coped so well with that. So, lots really - lots of standout moments.

What are your interests outside of dance and choreography?

John: I’ve seen the film Bridget Jones’ Baby about 7 times and I’m going to see it again next week. I’m going to see Burn the Floor tomorrow at the Peacock Theatre, and I once saw Legally Blonde: The Musical which was really good. The characters were a bit snobbish, but it was good.

What you think about attitudes towards learning disability?

John: I don’t see many people with a learning disability around these days when I’m out. But when you do you can’t just stand there and judge someone. Everyone is who they are. For instance, you can’t not dance with someone just because they’re different. It’s like what Sarah [Gordy] says, everyone’s equal.

Caroline: It’s hard to put 30 years of experience into one or two sentences.

My role has seemed to be positive and say well, it’s not that big of a deal. Interestingly, looking back 30 years on, I do realise that the difficulties that have come, and there have been very many, actually have come from society’s attitude towards disability, not from John.

I feel that when John is out and about travelling around London independently he’s actually making a political statement because he’s doing something that people don’t expect him to do.

We’ve explored all sorts of things, particularly in the mainstream job world, like trying to get a job in retail, or a job in a cafe. There was one scheme that John was on for 3 years where we were literally paying £50 a day for him to go to a cafe and set up tables. It got to the point where I thought hang on a minute, where is this going, what are we paying for? There was another time where he was asked to apply for a job, and the job was filling envelopes for 3 hours, once a month. So there’s a long way to go in terms of opportunities.

What are your upcoming projects and hopes for the future?

John: In the future I could see myself performing in a show like Chicago. I really like Chicago lots. It’s about murder, but it’s one of my favourite shows.

Caroline: Resolution 2017 is on 21 February, that’s John’s own show. This is a real breakthrough because it’s very prestigious; it’s the annual platform for emerging choreographers. This is the first time that John is being publicly credited for his choreography as well as his dance. The title of his piece, which has come from John, is Am I A Waste of Space?. So it’s quite powerful. It will be a 20 minute piece, so that’s what’s dominating our work schedule at the moment.

We got Aeren to answer some questions. Take a look at the chat to hear her thoughts and experience of having a learning disability...

Return to the Here I Am homepage