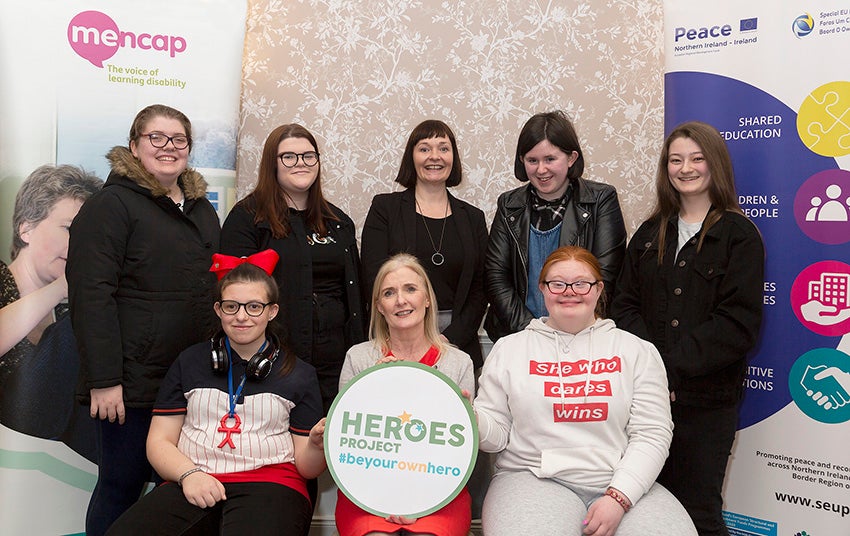 A new EU PEACE IV funded youth project ‘HEROES’ for young people in Belfast, Fermanagh and Derry/Londonderry was officially launched recently at an event at the Silverbirch Hotel in Omagh.

HEROES groups have been set up in each area with young people taking part in activities such as music, visits to historical sites, community fundraising and after school groups.

HEROES is an inclusive, cross-community, cross border project that supports young people with and without learning difficulties with personal development, citizenship and good relations. It has been supported by the EU’s PEACE IV Programme, managed by the Special EU Programmes Body.

Lewis Morrow, participant in the Belfast HEROES project, who joined one of the first groups being set up said: “I liked meeting new people, learning new things and having fun at the HEROES project.”

Mencap NI is the lead partner in the project along with Londonderry YMCA, Devenish Partnership Forum in Fermanagh, Health Service Executive in Donegal and Sligo and the Special EU Programmes Body.

Margaret Kelly, Director of Mencap NI said, “We want young people from all communities and abilities to get involved in the HEROES Project so they can develop their confidence, have new experiences and build positive relationships that will last.  We want the young people we work with to have an amazing experience they won’t forget.”

Continuing Maragret Kelly said, “HEROES has provided a wonderful opportunity to ensure that young people with learning difficulties benefit from PEACE IV’s Children and Young People’s programme. These young people experience many of the same legacy issues as other young people, but without programmes specifically designed to include them it can be difficult to access the help and support available to others.”

Outlining the importance of the project Gina McIntyre, CEO of the Special EU Programmes Body said: “The EU’s PEACE IV Programme recognises the importance of young people. Specifically the role that they can play as agents of positive change. Change in themselves, as they gain new skills and confidence, and also change in society as they bring home what they have learnt to their friends and families in order to create a more peaceful and cohesive society. This is an inspirational project and I would congratulate everyone who has taken part in it.”

HEROES stands for Helping Equality, Respecting Others, Enabling Success and the project allows young people to take part in group work, individual mentoring, cultural trips, and free residentials. All activities are based on the young people’s interests and what they like to do.

Willie Lamrock, General Secretary of Londonderry YMCA said, “It is a pleasure to be partnering with Mencap in the North West in the delivery of a fantastic programme that brings so much support to the young people who have engaged in the various elements. YMCA look forward to continuing the work with Mencap and the other partners".

Keelan O’Hagan, participant in the Derry/Londonderry HEROES project, who joined one of the first groups being set up said: “The best thing about the Heroes project has been getting together and having fun in the group.”