Cormac Neeson and Mencap NI are delighted to announce a new relationship that will see Neeson become an ambassador for the learning disability charity and will see Mencap fully support his new forthcoming single Broken Wing and album White Feather.

The new partnership stems from an instant connection with the lyrics of Neeson’s new song Broken Wing. 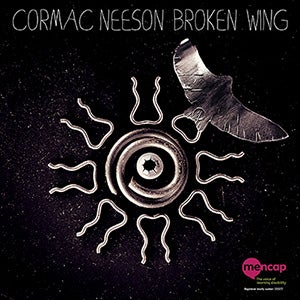 In 2014, Neeson's son Dabhóg was born 3 months premature and with Down’s syndrome. The impact of this life changing experience had such a lasting and profound effect that Neeson sought solace in penning an autobiographical and emotional account of his inner thoughts and what it’s like to bring up a child with disability.

Commenting on the track, Cormac says:

“I’ve never written a song like Broken Wing before. Even though I’ve heard it hundreds of times now, I still get emotional every time I sing it back because of just how relevant the lyric is to my life and my family’s life. It’s my hope that maybe when people hear this song they can relate to the message. I can’t speak highly enough of the Mencap Children’s Centre who have provided invaluable support and advice to us and played a major role in my son’s development.”

Neeson’s son Dabhóg attended the Mencap Children’s Centre in Belfast when he was 2 years old.

The centre is a unique specialist learning environment for children with a learning disability, autism and developmental delay, which is run in partnership with the Belfast Health Trust.

The charity also provides programmes and family support services to help parents and carers of young children with a learning disability.

Margaret Kelly, Director of Mencap NI and the team at the Children’s Centre were immediately taken with the power of the song, Broken Wing.

“We are very excited to be working with Cormac Neeson on this new project, the very emotional song Broken Wing, inspired by his son Dabhóg who attended the Mencap Children’s Centre last year. The song and Cormac’s family story will help raise awareness of learning disability and Mencap’s early intervention work to give all children the best start in life. The lyrics in this song are very special and will connect with so many parents, we are delighted to be involved.”

Co-written by Tennessee legend Blue Miller, the track was recorded in Nashville and mixed in Belfast. It features an emotional arrangement that combines the best of both those rich and diverse cultures, including beautifully crafted Nashville pedal steel by John Heinrich (who has performed with artists such as Garth Brooks, Shania Twain, and Tammy Wynette) to a magical blend of choral backing vocals from some of the finest Northern Irish singers, hand-picked by Neeson.

The production and sound of the finished recording conveys the vulnerability that such a delicate subject matter demands.

In support of the single, Neeson has also made a short documentary about the making of Broken Wing in which he gets an extra chromosome (which causes Down's syndrome), tattooed on his shoulder. The documentary, lyric video and main music video for Broken Wing will be released in the lead up to World Down’s Syndrome day, on Thursday 21 March 2019.

In the reprised words of the chorus, Neeson captures his feelings with the very powerful lament  “Perfectly beautiful, Beautifully perfect...I wouldn’t change a thing”.

You can support families of children with a learning disability, like Cormac Neeson's.

You can donate online by visiting secure.mencap.org.uk.

Alternatively you can show your support by taking part in one of our exciting new events, such as our golf day, race day, skydive or abseil.