Over many decades we have campaigned with people with a learning disability, their families and carers to achieve positive change in their lives.

Campaigning really can change the world, and here are some of the biggest gains we’ve made together.

Judy Fryd was a mother of a child with a learning disability.

She wrote a letter to Nursery World magazine inviting other parents to contact her. Many wrote back expressing their anger and sorrow at the lack of services for their children.

1958: We prove children with a learning disability need homely settings

Mencap launched a ground breaking project, which proved that children with a learning disability in small homely groups, with a better staff ratio, develop much more rapidly than those in larger institutions.

Its success is published around the world.

1971: A report recommends a move from institutions to the community

The Department of Health published a report titled ‘Better Services for the Mentally Handicapped.’

Parliament passed the Community Care Act, recognising the rights of disabled people to be an equal part of society.

The Act made it the duty of local social services departments to deliver community care for those who need it.

Parliament passed the Disability Discrimination Act (30 years after the Race Relations Act). It aimed to end the discrimination faced by many disabled people and to guarantee their civil rights. The Act requires public bodies to promote equality of opportunity for people with disabilities. It was superseded by the Equality Act 2010.

2000: Hate crime people with a learning disability is exposed

In 2000, Mencap published research which found that as many as 9 out of 10 people with a learning disability had experienced bullying and abuse, with almost half of people suffering verbal abuse and almost a quarter being physically assaulted. The vast majority of these instances of abuse were happening in a public place, and as a society, we were looking the other way. We now call this disability hate crime.

In 2003 the Criminal Justice Act introduced disability hate crime into law. For the first time it was recognised that some people were committing crimes against disabled people due to prejudice and hostility, and that crimes such as this should receive harsher sentences.

In 2003, Mencap launched the Breaking Point campaign with the first of three Breaking Point PDF reports which showed that 8 out of 10 family carers had reached breaking point - a moment of crisis when they felt they simply could not go on. We highlighted this huge failing and called for the Government and local councils to ensure every family who needs a short break gets one.

2005: The Mental Capacity Act is passed

Parliament passed the Mental Capacity Act. The Act provides the framework for acting and making decisions on behalf of adults who lack the capacity to make decisions for themselves.

2006: Carers still not getting the support they need

Our follow-up Breaking Point PDF report in 2006 found that little had changed, and in fact cuts to local services were starting to bite, taking away the minimal support families had been relying on.

The Breaking Point campaign shone a light on this shameful situation and in 2007 and 2010 the Government gave specific pots of money to local councils for short breaks.

2007: We campaign against bullying of children with a learning disability

We met with the then Secretary of State for Children, Schools and Families and asked him to make sure schools were doing their job in protecting children with a learning disability from being bullied. Following this meeting, the Secretary of State wrote to all school head teachers urging them to take bullying of children with a learning disability seriously.

We also spoke at an Ofsted conference and urged Ofsted to make sure schools were dealing with incidents of bullying of children with a learning disability properly when they inspected them. Following this, Ofsted’s inspection framework was updated with a much stronger focus on bullying than it had previously.

2007: The loss of six lives highlights institutional discrimination in the NHS

This triggered an independent inquiry and an investigation into the six cases. It also played an important role in influencing the Department of Health to commission the Confidential Inquiry into premature deaths of people with a learning disability.

The government closed the last of the long-stay institutions in England. However several thousand people with a learning disability remain stuck in inpatient units, as the Winterbourne View scandal will highlight.

Find out what happened in the 2010s until now.

Three years later in 2010 we launched the Getting it right PDF charter, which provided trusts and health organisations with guidance on how they could improve the care received by people with a learning disability. Over 200 trusts, hospitals and organisations signed up to the Getting it right charter, committing to improve healthcare for people with a learning disability.

2011: A person with a learning disability is elected

Gavin Harding was the first ever person with a learning disability to be elected a local councillor. He became councillor in Selby, Yorkshire.

2011: Stand by me campaign to stamp out disability hate crime

In 2011 Mencap launched the Stand By Me campaign to end disability hate crime, accompanied by this PDF report which found that many police services across the UK had no hate crime structures in place and that victims felt ignored by the police.

We called on police forces to take the police promise – a charter of 10 things they would do to improve how they tackled disability hate crime and served people with a learning disability. We later called on elected Police and Crime Commissioners to pledge their personal commitment to working with us to end disability hate crime. Since 2011, 42 police forces and 25 Police and Crime Commissioners have backed the campaign across England, Wales and Northern Ireland. In 2012 we launched a best practice PDF guide which shows how the police’s promises were being put into action.

While there is still a very long way to go before we have stamped out disability hate crime, figures of recorded crimes show that police forces are getting a better grip on the problem and results from the Crime Survey of England and Wales show that the number of disability hate incidents has fallen considerably since 2007.

However, by 2012, we had 74 deaths reported to us leading to the publication of Death by indifference: 74 deaths and counting PDF report which showed people with a learning disability were still not receiving equal healthcare in all NHS settings and were continuing to die as a result.

2013: We keep the Breaking Point campaign on the agenda

In 2013 we released our third and final Breaking Point PDF report which found that, ten years on, 8 out of 10 family carers were still reaching breaking point and 4 out of 10 families had had their short breaks services cut. On the back of this report, we asked people to write to their local councils, urging them to stop cuts to these vital services.

Since our campaign, we know many councils have listened and are protecting funding for short breaks. Others, however, have not, and we continue to get calls from families up and down the country who are facing cuts to their much-needed short breaks services. Wherever we can, we are working with them to fight for these services, and we have had a good many victories.

Our Hear My Voice campaign launched in 2014 to put learning disability issues higher on the political agenda. We got the main political parties in the UK to make easy read versions of their manifestos. This helped to make politics more accessible for people with a learning disability.

The campaign has connected people with a learning disability and their families and carers to politicians and the people in power in a way that hasn't happened before. Find out more about the campaign or watch the video. 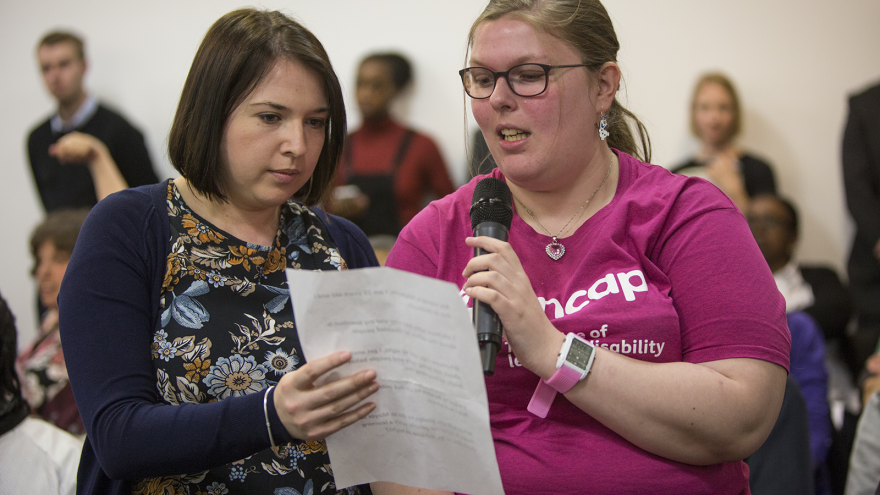 Whether you campaign, raise money or volunteer your time, together we're changing the world
Read more about Get involved