Hear from Jane, whose son James has a learning disability, on why she thinks it is essential that senior medical staff should have mandatory disability awareness training. 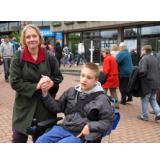 My son James has a learning disability and sometimes he looks as if he's on another planet, but a teacher who underestimated him once got hit in the groin.

Although James may appear to be miles away, he senses within seconds whether a person is talking to him or at him.

James meets many different people from health services and most of them rightly treat him as an equal, even though he is sitting in a wheelchair and has no speech. I often have a lump in my throat at their kindness and sensitivity.

However, every now and then we come across someone senior, for whom I suspect their patients are academic medical issues, rather than individuals. They will greet me rather than James, even though he is a teenager, and they will talk about him as if he isn't there. The impact on his confidence is no different than it would be for anyone. He will refuse to cooperate with getting undressed or transferring onto a bed if he feels he is being patronised.

Senior medical staff deserve the deepest respect for their abilities and commitment, but the era of regarding consultants as gods is over. They are employed by the state to treat vulnerable members of the public and must be equipped to do this beyond the medical issues at hand.

I have friends who are medics and I can hear them groan at the thought of more training added to their already heavy workloads. But mandatory disability awareness training could improve the experience of thousands of disabled people in the NHS, and avoid the horrendous situation which we hear about, such as placing Do No Resuscitate notices on the files of people with Down's syndrome.

It might also lead to a change of policy to allow adults with a learning disability to be accompanied by their relatives and carers at all times.

Two years ago I was told that James would need a major hip reconstruction and that I had better get it done before he turned 18. When I asked why, it was explained that he would no longer get to be on a paediatric (children's) ward. The staff ratios would be lower and I would not be allowed to be with him outside visiting hours.

Since James needs 2:1 care for his own safety, I was horrified.

If left alone he would crawl off his bed, chew electric cables and go and 'visit' other patients.

The operation is out of the way now; I have to hope that if another becomes necessary, things will be different.