Hear from Angela, whose son, Alex, spent over a year in and out of hospital. Despite noticing that Alex was in pain, Angela found that the hospital staff she dealt with weren't able to change their way of thinking to diagnose Alex.

Alex was 10 years old when he was first admitted to hospital with severe stomach pains.

He was given antibiotics, but appendicitis was ruled out at first because he was able to jump up and down when the surgeons asked him to.

Although Alex can articulate his pain, he doesn't demonstrate it like other children might. He doesn't curl up, cry or tell others about it unless he's asked. I can see the changes in his demeanour and behaviour though.

The surgeons started to talk about discharging him without resolving any of his pain. So, I demanded he was sent to our nearest children's hospital. Within an hour of him arriving there, he was diagnosed with appendicitis and rushed into surgery.

Just over a year after this surgery, Alex began to complain about severe pain in the same place, but now it was hurting all the time. 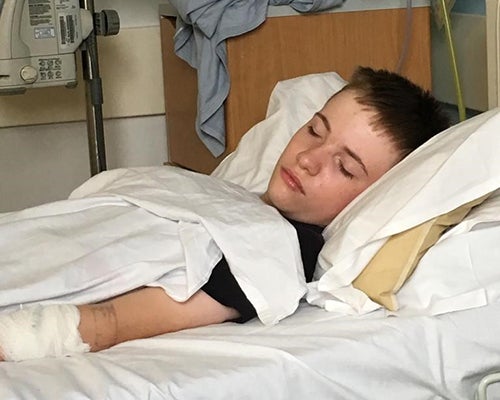 I lost count of the number of times we went to hospital and were turned away, almost on a daily basis, because Alex didn't appear to be a medical emergency.

Although I told them that he has an inability to show pain I felt like they didn't actually listen - like they heard the words but couldn't translate them. I'd be in tears telling them "My son's got nowhere to go with this pain" and they'd just look at him and say "He's not in pain".

For months I was constantly fighting, it was exhausting. Alex was in so much pain, I couldn't even bear to sit in the same room as him.

By now, Alex was withdrawn, life just stopped for him. He wasn't going to school or swimming; things he usually loves doing. He also wasn't eating which meant he lost a lot of weight; at his lowest point he weight about 4 and a half stone (29 kilograms).

Nobody was able to tell us what was wrong with Alex. I began sleeping in his room as he wasn't sleeping well, and I didn't want to wake up in the morning to walk in and find him dead, alone in his bed.

"I don't think this pain is ever going to go away" he said to me once. I asked Alex "if it doesn't go away do you think you can manage?" and he said "no, not a pain this big". He just couldn't take it anymore.

Through perseverance we managed to get a few tests done - X-rays, ultrasounds, a barium meal. But I felt like they were doing this to shut me up rather than find out what was causing Alex's pain. We eventually got an appointment to see a surgeon, by which point we were desperate. When I walked into her room I just broke down.

The surgeon was taken aback and could see that we were at the end of our tether. She agreed to perform an explorative operation, but even said "you do know that when we go in there, we're probably not going to find anything, don't you?"

That would have been the worst case scenario as it would have meant Alex living in pain forever.

The surgeon was shocked with what she found - half of Alex's appendix remaining from the operation over a year earlier.

The doctors think that it was regularly becoming infected and causing Alex's pain. I was just relieved that they'd found something that they could fix. He'd been in constant pain for 104 days at this point, but now it was going to be over.

Alex could have died at any point, he'd had appendicitis on and off for 16 months. If the worst had happened to Alex, I wonder if anybody would have learnt any lessons from it?

What summed it all up for me was that on one occasion when Alex was in hospital, there was a child with appendicitis in the next bed. The staff were running around giving him painkillers, and anything he needed, but ignoring Alex. Just because he wasn't able to demonstrate his pain in an obvious way.

That's where the failure is, there is a lack of understanding of learning disability amongst hospital workers.

All doctors, nurses and any medical professional needs to have mandatory training on how to listen and treat people with a learning disability and their carers.

A donation to Mencap could let us continue our vital campaigning work, raising awareness of what quality healthcare looks like for someone with a learning disability.

We want to ensure that experiences like Alex and Angela's don't happen again.

A donation to Mencap could let us continue our vital campaigning work, raising awareness of what quality healthcare looks like for someone with a learning disability.