My name is Eric Walker, I'm 21 and live in Southampton. I graduated from the University of Winchester this Summer and now work as a Data Analyst but I also have a sideline as a singer and songwriter.

My connection with Mencap

Mencap means a lot to me because I suffer with Semantic Pragmatic Disorder, Dyslexia and Dyspraxia. I have also worked as a support worker for adults with severe autism. I think Mencap does some great work but is often overlooked.

In early 2016 fellow student Stephen Blackwood, 19, and I undertook a 24 hour radio show on our university’s radio station Sound Radio. We wanted to raise money for Mencap and awareness about learning disabilities. We both love presenting on the radio and already presented our own 2 hour shows every week but presenting for 24 hours was a very big challenge!

The 24 hour radio show was really fun but tiring! It was very tough, especially once we reached the 10th hour of the 24 hour show. As you can see from the photo of us both looking rather tired in the studio - apologies for the bags under my eyes! Stephen Blackwood is on the left hand side of the photo and I am on the right hand side. 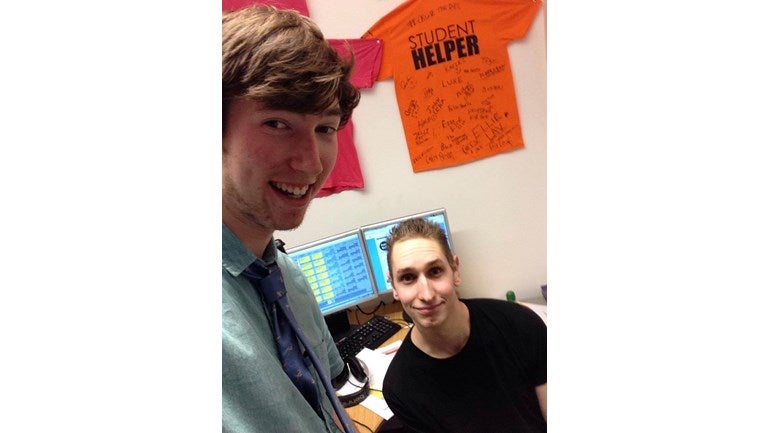 We started to get very tired and a little bit stir crazy as the show went on, but through perseverance and seeing the donations go up and up we made it through. As we approached the sunrise we knew we only had a few hours left and we became extremely determined to see it through until the end.

It was brilliant seeing our listener’s donating as the show went on and we ended up raising a fantastic £230.

If Eric and Stephen's story has inspired you to raise money for Mencap visit the Fundraising, your way webpage to find out how we can help you.

We value your support and the trust you have put in us - without you we couldn't be there for the 1.4 million people with a learning disability in the UK
Read more about Our fundraising promise