Sticks and stones? Words will, and do, hurt me

Why doesn't the R-word receive the same backlash as other hurtful terms? We are, once again, in the middle of a political race row.

Thinking she was having a private conversation, Anne Marie Morris MP was captured using a racial slur and the news about this has spread fast.

What she said was despicable. It seems incredible that anyone in the 21st century feels anywhere close to comfortable using that sort of language, whether in private or public. There have been calls for Anne Marie Morris MP to resign or be sacked. I feel this is rightly so.

However, where was the outrage and coverage when Dominic Cummings, a political advisor and strategist, tweeted about "morons" and a plan "near-retarded on every level"? There wasn't any. 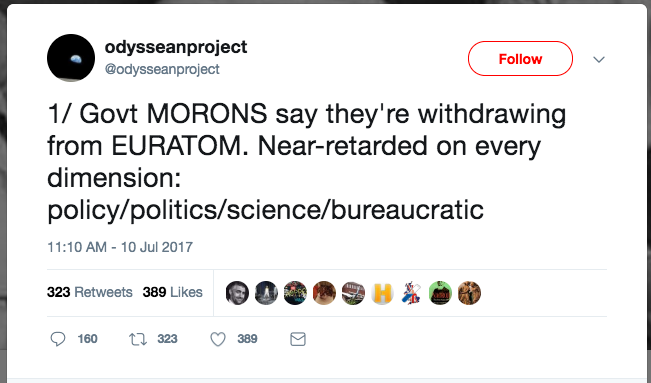 The only people who protested the use of this language where those, like me, within the disability community - and then we get shot down for being over-sensitive and "silly liberals".

I hear the R-word (including its variations) on a weekly basis. I can't fully explain the effect hearing it has on me. For someone who considers themself an advocate for disability it leaves me completely speechless. It makes me feel winded, as if I've been punched in the face, my cheeks flush hot and I'm often left shaking and uncomfortable.

Someone once described my middle son as looking "retarded" when he pulled a face for a photo, and a previous colleague once described an ex-colleague as a "bit of a retard". I once spent 20 minutes debating with another parent over the use of the R-word, as they told me I was being over-sensitive and that "it isn't meant like that".

So, if people don't mean it in "that way", how is it meant? Why can't people take ownership and admit it is a slur on one of the most vulnerable groups of society? Why do people struggle to comprehend or acknowledge it's offensive use, and why can't they just say sorry and not use it again?

Sadly, I suspect the real reason that people defend its use is because people with a learning disability have such little perceived value to the majority of society. Not seen. Not heard. Not considered. Not important.

So, here's the thing. Whether you think the term is offensive or not, it isn't actually up to you to decide. It's for the minority group who find the slur hurtful, to decide - and I'm telling you that they would like you to stop using it.

Find another word, and maybe next time you hear someone else use the R-word, stand up to it and be outraged too.

Caroline White is the author of The Label: A Story for Families, published by Ivy Press, £6.99.

10% of proceed from the sale of this book will be donated to Mencap.