I love my new life!

It feels like my life finally has a purpose. 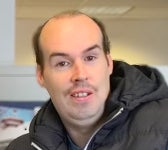 I just want to say straight off that I love my new life. I am now working, and that is purely down to Mencap, especially Fatima who put some vital dots together and introduced me to the Rio Cinema.

Basically I love cinema and I really wanted to work. Mencap arranged for me to do some voluntary work at the Rio Cinema in Dalston, things have just taken off from there.

It feels like my life finally has a purpose.

I had never worked before.I’d volunteered at a few places, but it hadn’t come to anything. I was finding it quite hard to cope without a purpose. Being honest, it got to the stage where I was too depressed to come out of the house.

Things started to change when I was asked to join the Mencap football team – I was given the responsibility of being the Captain. This got me more involved with people on the team.

This was a real boost, it gave me the confidence to go out more. It gave me the self respect I needed to take the voluntary role at the Cinema when it came up.

I think everybody who knows me knows that I absolutely live for cinema. Star Wars is my favourite ever film and for my birthday recently the guys at the Cinema arranged a showing of one of the films for me. I’ve made a whole new bunch of mates there.

I must admit that at first I was worried because the people that worked there were very different from me. I’ve always preferred war films and they liked art films - but the more I work there, the more I get to appreciate the things they like.  I’ve met all kinds of new different people working there.

The cinema is sending me on volunteering courses at the BFI and the Phoenix cinema, so I’m learning more and more each week, and becoming more involved in the world of cinema.

I’ve resigned from the football team - I feel really grateful to them, but my life’s moved on from that time.

I will never forget what the team did for me. There were lots of people at Mencap that really supported me to change my life, and that means a lot.

It’s good to be able to say; that like in the best films - this tale has a happy ending.