For the second community impact project, Mencap worked with 14 people with a learning disability from Cheam Resource Centre.

The group felt that their local community venue, Cheam Resource Centre, would benefit from a bit of brightening up, so they decided to create a mosaic to be proudly displayed in the main room.

The group worked together once a week for three months to create the mosaic before unveiling it at a launch event, where the Mayor and Mayoress helped to show off their work.

The group were responsible for the planning, such as the mosaic design, who would take responsibility for which tasks and time management to ensure it was completed punctually.

The group decided together that they wanted the mosaic to reflect how much they love being a part of the local community and with Mencap’s support identified images of the activities and values that were important to them and used these as templates for the mosaic. For example, the mosaic features images of a minibus which they use to access community activities and an image of friends with their arms round each other. The familiarity of these images helped the group understand what the aim of the mosaic was, and how it represents their interests.

Before starting the project, all the individuals took part in a health and safety briefing to ensure they fully understood how to work together safely. During the project the group were encouraged to be as independent as possible and their ideas and opinions were sought at every stage, from where the images should be positioned on the mosaic board to how many extra tiles should be bought.

The project had a particular impact on one of the individuals who has a visual impairment and had previously not been interested in arts and craft activities. However, the idea of a mosaic caught her attention and she took part in every stage of the process. She had to get very close to the board because of her visual impairment and sometimes had hand-over-hand support from staff but she persevered and became one of the most enthusiastic tilers, doing more grouting than anyone else in the group!

Photos were taken of how the mosaic changed, ensuring the group were able to visually see their progress week on week, helping them to see their achievements and feel proud of their work.

Before the arrival of the guests the group helped to set up the space, putting up the gazebo outside, decorating the room and preparing the food.

When asked if they enjoyed the event one member of the group said she “enjoyed being photographed with the Mayor and Mayoress of Sutton” another individual said they “enjoyed sharing the project with others”.

The Mayor of Sutton Councillor Richard Clifton fed back:

“Could I say how much I enjoyed unveiling the mosaic and I was incredibly impressed by the work that had gone into it”.

The week following the event the individuals reviewed how they felt about their journey and discussed what they got from being involved in the project. They also received certificates of achievement to mark their success. 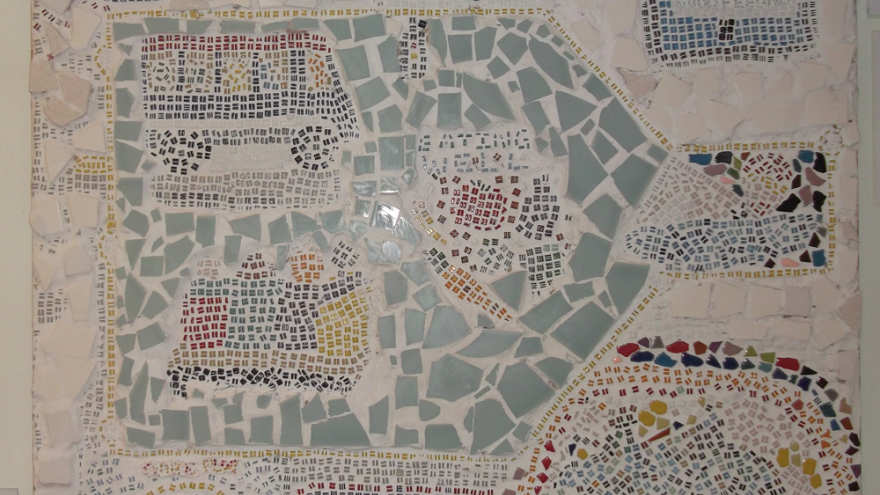 This is the mosaic that members of the Cheam Resource Centre created to brighten up the venue.

The mosaic is currently displayed in the main room of the centre, for all to enjoy.

We work with people with a learning disability to support them to make a difference in their community.
Read more about Community impact projects in London

We value your support and the trust you have put in us - without you we couldn't be there for the 1.4 million people with a learning disability in the UK
Read more about Our fundraising promise