Ronnie missed out on the support he needed when he was in hospital. He was fed incorrectly and his communication needs were not understood. Here, Ronnie's nieces, Karen and Jen, describe what happened. 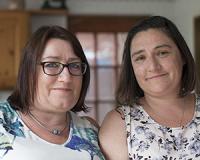 Our Uncle Ronnie was a real personality who adored barge holidays and Saturday nights with a takeaway.

He had a severe learning disability and didn't have much language, and he needed a lot of support with his Obsessive Compulsive Disorder (OCD). Change was upsetting for him, he needed total stability from people who understood him.

In 2015 Ronnie went into hospital with a suspected urine infection and stayed there for two months. The issues began immediately. Ronnie was moved to six different wards during his first fortnight.

He was in pain, he was scared, and they just didn't know how to deal with him - but they weren't listening to anything we or his support workers suggested.

We saw that Ronnie was being fed incorrectly; he needed support to eat as he was at risk of swallowing food the wrong way. On day seven we found out he was being treated for pneumonia - a throwaway comment from one of the his nurses. Pneumonia can occur easily if food is ingested into the lungs and we think this is probably what happened to Ronnie.

The hospital staff did not take his specific needs into consideration. For example, his favourite items were his zips. He used to sit, zipping and unzipping - it soothed him. But during one of the many ward moves, they lost all his possessions - including his zips. It might sound insignificant, but without his zips Ronnie began lashing out, and simple things like putting on oxygen mask on him became impossible. But the attitude from staff was, 'they're only zips'.

Eventually, Ronnie was discharged, but he never the same again, and he died a year later. Training on learning disability and reasonable adjustments should be compulsory for all staff: from the doctor to the person who brings the teas and coffees.

Reasonable adjustments don't need to be huge things to work. It's just thinking about what a person will need and remembering everybody is different.

You can support Treat Me Well by signing up to receive information, resources and stories.