The people who have the most responsibility for how Royal Mencap Society is run are our trustee board. Meet our trustees here.

The people who have the most responsibility for how Royal Mencap Society is run are our trustee board.

The trustee board is made up of the chair of Royal Mencap Society and up to 12 trustees.

Trustees are appointed for a 4 year term and can serve 2 terms in total.

The board of trustees holds a range of reserved matters and gives certain authority to our executive team in order to run Royal Mencap Society efficiently.

Appointed as Chair in 2014, Derek has had a long career in financial and general management, operating internationally as CEO and chair in the public and private sectors. He was chief executive of Granada Group, founded UK Gold Television and was the Director General of HM Prison Service. In the not-for-profit sector his roles have included  Pro-Chancellor of the University of Essex, a trustee of the Royal Voluntary Service, chair of The Drinkaware Trust and chair of Community Alcohol Partnerships.

He is chair of the Nominations Committee and is a member of the Audit and Risk Committee, Finance, Planning and Remuneration Committee and Quality and Compliance Committee.

Elaine has been a trustee since November 2015. She has substantial commercial experience in brand marketing and has worked in the charity sector since 2009. Elaine is currently CEO of Drinkaware and previously worked at a senior level for The Children’s Society. Elaine is also a member of the Finance, Planning and Remuneration Committee.

Stephen has been a trustee since June 2014. He is a chartered accountant who, in his executive career, held senior management positions in a number of international financial services organisations. From 2007 until its closure in 2015, he was the chairman of the Independent Living Fund, a non-departmental public body sponsored by the Department for Work and Pensions, which provided support to more than 40,000 disabled people across the UK, during its lifetime. He is the Vice Chair of the Anchor Hanover Group, a Housing Association which provides homes and care for elderly people. He is also Vice Chair of the  Cambridge Building Society, and Director of MUFG Securities EMEA plc. He was awarded an OBE in 2014 for services to disabled people.

He is chair of the Finance, Planning and Remuneration Committee and a member of the Audit and Risk Committee.

Andrew was made a trustee in October 2015. He is one of our trustees with a learning disability. As well as his work with Royal Mencap Society, Andrew is a volunteer with the Leonard Cheshire Foundation and is a member of his local council Disability Advisory group and Access and Inclusion group.

Andrew is a member of the Quality and Compliance Committee.

David was appointed as a trustee in July 2016. He is a fellow of the Chartered Institute of Housing, He has worked in senior positions in the Social Care and Housing sectors for over 40 years, including over 10 years as Chief Executive of Dimensions, a major provider of services to people with learning disabilities and autism. In 2014he was appointed chair of Connect Housing Association, which operates in West Yorkshire.

He is chair of the Quality and Compliance Committee.

Yogi was appointed as a trustee in November 2018. He is a senior partner at Irwin Mitchell and a legal specialist in the areas of human rights law, community care law and mental capacity law. He was a Trustee of the Independent Living Fund for over eight years.

Lucy was appointed as a trustee in November 2018. Her background is in satellite technology. She is Chief Operating Officer and Director of the Satellite Applications Catapult, one of a network of Catapults backed by the Government to remove barriers to innovation. She has held a number of board roles and is currently a non-Executive Director of the Cornwall and Isles of Scilly Local Enterprise Project.

Jackie was appointed as a trustee in November 2018. She is a technical lead for a software company which supports Hospital Trusts through digital transformation. She is Chair of Carrickfergus Gateway Club, where she has been a volunteer for over 20 years. She is also a trustee for a local charity, CAUSE NI, which supports the carers of people with mental health problems.

Kathryn holds a number of non-executive roles including Chair of the Office of Tax Simplification, non-executive Board Member at Companies House, the UK Supreme Court, Crossrail and Highways England, member of the External Audit Committee of the IMF and Trustee of Royal British Legion Industries. She is a past Chair of the Financial Reporting Advisory Board to the Treasury and the ICAEW’s Financial Reporting Committee.

Phil is an accountant by training having qualified with Grant Thornton in Oxford. He then moved into industry and undertook a variety of roles culminating in being the Global CFO for Castrol, the lubricants company.  Since leaving Castrol he has  undertaken various Executive and Non Executive roles in Not For Profit organisations; including acting as Interim Finance Director for the British Red Cross and has also completed six years as trustee for Young Epilepsy based in Surrey.

Catherine is  a Board level business leader with an engineering mind-set and a track record of accelerating performance through transformation in a diverse range of businesses. She has worked in healthcare and technology for the last ten years and is currently CEO of Reframe which supports people who have been diagnosed with cancer. Prior to that she was on the board of McKesson UK and previously ran UK operations for Amazon. She spent the first part of her career in supply chain in retail and manufacturing businesses.

Sohail has undertaken a number of senior executive, advisory and board roles in major telecommunications and technology companies across the world. He has had leadership roles in key telecommunications companies undergoing major strategic change and has lead in creating customer oriented organisations and brands, development of corporate strategies, execution of commercial plans, M&A, performance and productivity management, execution of new digital services, and culture change initiatives.

Kathryn has experience of leadership in Local Government through several roles in Stockport and Wigan Council and is passionate about improving the lives of people and communities.

She joined Stockport Council as the Director for Strategy and Commissioning in 2020 where she has responsibility for policy, partnerships, community development and workforce.

She previously worked for 8 years in Wigan Council, where she played an integral in the design and delivery of the Wigan Deal which transformed the way the council worked with communities.

Mencap's president was Lord Rix. Brian Rix entered the field of learning disability in December 1951 when his first child, Shelley, was born with Down's syndrome.

He first used his fame as one of the nation's best-loved comedy actors to raise money for Mencap, and was awarded a CBE in 1977 for his fundraising efforts. He continued to fundraise and campaign on behalf of people with a learning disability and their families. From 1980 to 1988 he was secretary general of Mencap, becoming chairman in 1988 and then president 10 years later.

Brian Rix was awarded a knighthood in 1986 and became a life peer in 1992. He was a tireless force in the House of Lords, using this position to influence critical legislation, ensuring the interests of people with a learning disability are represented.

Lord Rix sadly died on 20 August 2016. You can read our full tribute to his life and work here. 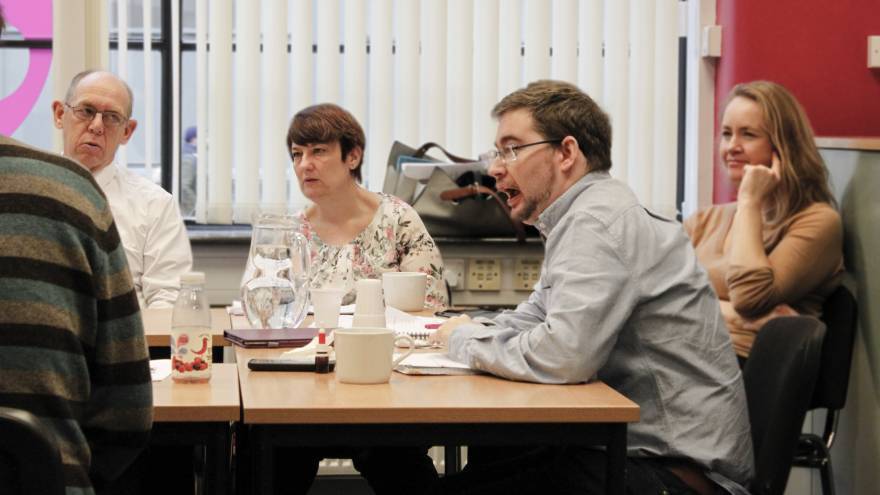 The Voices Council advise and guide Mencap on their priorities and decisions by sharing their views with the board of trustees at every trustees meeting.

Find out more about who they are, what they do and what they're working on at the moment.

Learn about the Voices Council

Find out all about Mencap; who we are and what we do.
Read more about About us

Services to help you