I used to think that my disability held me back, but later on, I saw it as a strength. 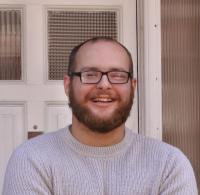 When I was younger, having a learning disability and life in general was very tough. I used to think that my disability held me back, it was very frustrating, honestly, I was often annoyed. But later on, I saw it as a strength.

Basically, for five months I was homeless. I was living in Brighton and I slept under the pier, on the sea front, wherever. I tried to see it as a challenge.

I suppose the real challenge was that I was still in college. It was a weird time, and it was weird for people at the college as well, as they knew. I was going there in the morning like nothing was going on - throughout the day we’d even have a laugh and a joke and all that. Everyone was kind and tried to support me as much they could.

The weirdest thing was at the end of each day, leaving through those doors. Going off and standing there and thinking, "What do I do now?" I had no home to go back to. It was a bizarre feeling going in as normal, going out feeling like, “What do I do?” But I needed to stay in college.

I’d been down to the council a series of times, with the college and by myself, but it didn’t do any good. Someone from the college ended up calling Mencap.

Once we were there for two or three hours. We had a lot of chats and the next thing we knew a social worker came out and things started rolling really. When you’ve got people around you it’s like a team effort. It’s like belongingness.

As soon as I knew that they’d found me somewhere I felt the strongest relief you can imagine. Relief and just a weight off my shoulders. When you’re constantly battling something day in and day out, then the next thing you know it’s suddenly over, it’s hard to imagine.

We went to see a place, just to see what it was like, and the next thing you know, in a matter of hours, they said I could move in.

I couldn’t help think after 5 months, it was all a bit too good to be true.