Voting is important – I went to Parliament to tell them why! 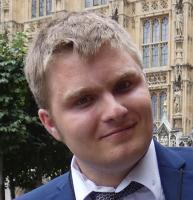 Because of my experiences of the last election, I was asked to go to the APPG meeting in the Palace of Westminster to talk about making voting easy enough for everyone.

When the election was called, I did not know what this would mean. My tutor explained what the government did and that we could vote for the MP in our area. Finding out everyone over 18 could vote was exciting - none of my class had voted in the last election even though we had all been 18 or older. Staff had to help me register to vote because the words used online were too hard for me to understand and I did not want to get it wrong.

We each thought about what was important to us. Some people looked at healthcare, benefits and transport. For me, it was really important to find out which parties would let me keep my bus pass, because that’s how I’d get to work.

At first, lots of the information was really difficult to understand because there were too many words. I tried watching some of the people who wanted to be MPs or the Prime Minster talking on the TV, but they used lots of words that I did not understand as well. It would be so good if they used normal words!

I was really pleased that some information was made easier to understand. We used easy read guides from Mencap that made things simpler. Without these I would have found it really hard.

On the day, I went to the polling station after work and was able to vote for the first time! Everyone there was really polite and helpful. I was so proud of myself for having my say about who should win. I will definitely vote again in the future, it is very important.

Going to talk about voting and how to make it easier for people with disabilities at the Palace of Westminster was exciting. I was very happy to be asked to talk about voting, because I know now why it is important. I did not know what would happen and how many people would be there and this made me quite nervous. I have worked on my reading a lot too but I am not very confident reading aloud.

Hearing everyone clap for me at the end was good too. I was very proud of myself. Some people shook my hand and said well done too, then I knew I had done a good job.

It is not fair anyone should miss out on voting because of a lack of easy to understand information. It is really important for everyone who wants to vote to be able to vote. I hope this will happen when there is another election.

Voting: A very grown up thing to do

Neil is in his 50s and lived with his parents until March 2016, when he moved into his own home supported by Mencap. Earlier this year he voted for the first time.
Read more about Voting: A very grown up thing to do

Download our easy read guides to voting and registering to vote, including for the 2019 general election.
Read more about Guides to voting