From three months to three days! 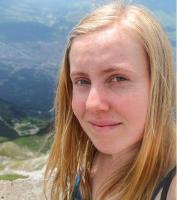 After having some time to reflect on the Mont Blanc Trek it is hard to find the words to describe it. I can’t believe how quickly the time went.

The trip started off at 6.30am at Heathrow airport where we met everyone who we would be spending the next five days with – everyone was really tired and we hadn’t even set off yet. On the transfer from Geneva to Chamonix we saw views of the mountains. It reminded me part of the reasons why I had signed up for the trek and I was excited to start.

At 8:30am the next morning we were up and ready to go. If we thought it was going to be a gradual ascent we were wrong, about 200m from the drop off point we started walking up, and it was steep. The higher we climbed the more the wind picked up which showed us the importance of having lots of layers, however there were hardly any clouds in sight. The views were worth it though and at lunchtime we reached our highest point for the trip (2537m). The rest of the day was downhill (we finished at 1600m in La Fouly) apart from a tiny uphill which felt like nothing to the morning’s walking. Unfortunately my camera broke which I was really disappointed about and was probably the worst part of my trip!

Day two was totally different to the first day, clear skies and no wind. The accommodation was interesting and was like one massive bunk bed with five mattresses on the bottom and top! We started off from our accommodation and were walking through Swiss villages which were quiet and pretty, one house even had an army of Gnomes (I have never seen so many). The lunch stop was beautiful and we were surrounded by mountains and were just outside a pretty village. Right at the end of the day we finished at Champex (1450m) a beautiful village next to a lake.

Before we knew it, the final day had arrived. The weather changed and we had rain pretty much the whole day – at least we got to use all of our kit! We were walking to Col de la Forclaz where the bus would pick us up and take us back to Chamonix. We walked through clouds and streams. It showed us how much the weather could change in the mountains, at points when we were waiting for others you could see across to the other side and a couple of minutes later it was just cloud again.

There were tears, tiredness and laughter and it was all worth it for the money we raised for Mencap and the sense of achievement once we had finished the trek. I have now achieved my target of £1200 and am currently on £1434. I find it hard to imagine one of the reasons I nearly didn’t sign up was due to the amount of money we needed to raise. Everyone has been so generous, it just goes to show that if you put your mind to it and the work in, you can fundraise a large amount of money. As for the trekking, it has reminded me how much I love being in the mountains and would 100% go on another trek.

Mont Blanc Challenge: Where have the last 3 months gone?

Emma talks about her experiences training for the Mont Blanc Trek and her fundraising journey.
Read more about Mont Blanc Challenge: Where have the last 3 months gone?

Mont Blanc Challenge: All the gear and no idea!

Jody talks about her life-changing challenge for Mencap.
Read more about Mont Blanc Challenge: All the gear and no idea!